Four new fungi for Hampshire in 2014 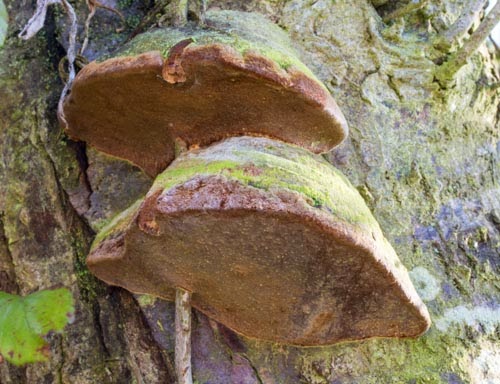 What better way to start the year than to add four new species of fungi to the Hampshire mycota.The first Fomitiporia hippophaëicola was found in early January by Phil Budd on the outskirts of the Hythe Marina.  Phil found several fruitbodies, 4-8cm across, on the trunks of Sea Buckthorn (Hippophaë rhamnoides), its preferred host in the UK. With nearly 90 records in the UK it is perhaps surprising that something as large as this has no been noticed before in Hampshire.


The remaining three fungi were all found near Fritham in the New Forest by Alan Lucas and were all resupinate or crust fungi which to the naked eye can appear superficially similar. They are affectionately known as 'Paint Jobs' in much the same manner as the 'Little Brown Jobs' applies in the bird world. However under the hand lens and especially the microscope a whole new world opens up, I kid you not. 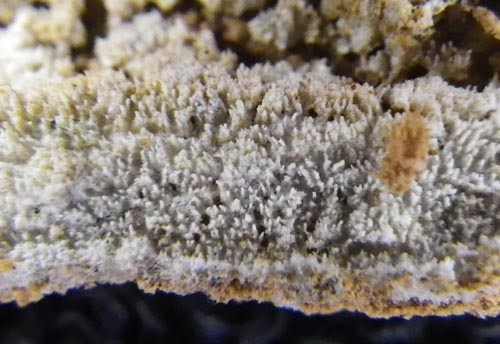 The first of these , Odonticium romellii, was also the first time this species had been found in England. The previous three records for this species were all in Scotland in South Aberdeen or Easterness. The New Forest often seems to lucky in being home to otherwise Scottish fungi.
The next new record for Hampshire was Tubulicrinis chaetophorus which was only the second time it had been recorded in the UK, the only other seemingly recorded site is South Devon where it was recorded by Peter Roberts over 20 years ago. 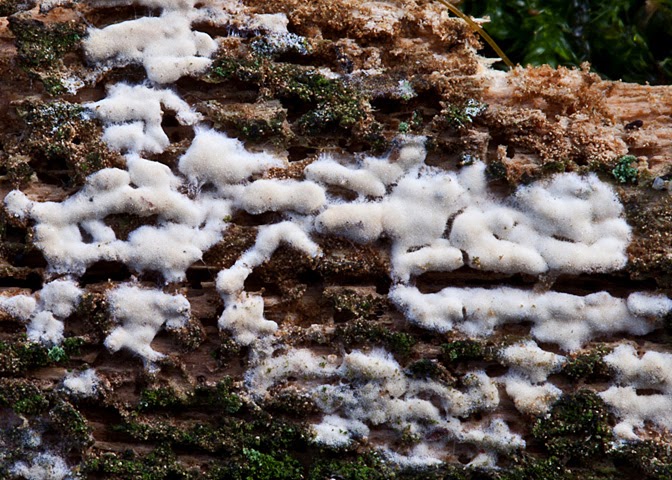 Finally but by no means least was Globulicium hiemale. Another 'Paint Job'  but with distinctive features including round globose spores which presumably gives the Genus its name, this species being the type species. It certainly lived up to its specific name 'hiemale' or winter, appearing as it did in the middle of January. There are only a handful of other UK sites for this species.
I suspect we shall never know what made Fritham so special this January but what a cracking start this is for the New Year.